Every soldier in the IDF receives a gun when they enlist: whether temporarily for basic training or the occasional guard duty shift, or for the entirety of their service, as is the case for combat soldiers. During basic training, a draftee will generally receive one of three assault rifles: an M4, M16, or a Micro Tavor. A question hotly debated  by soldiers persists: what’s better, the M4/M16, or the Micro Tavor?.

Both the American-made M16 and M4 have been sold to Israel as part of US military aide over the past number of decades, and are still being used today by the IDF. Slowly, the IDF has decided to start phasing out these older guns in favor of the Israeli-made Micro Tavor.

As far as the Infantry Corps of the IDF currently stands, the Paratroopers and Kfir Brigades  are still issuing the M4 to their recruits. The remainder of the Corps (the Golani, Givati, and Nachal Brigades) however,  have all made the transition over to the Micro Tavor.

Other combat units, such as the Artillery and Armored Corps, still today continue to use the largely outmoded predecessor to the M4, the M16. As is expected with the whole of the IDF in time, these units too will also be replacing their American-manufactured rifles with the Micro Tavor.

Ask any soldier of the Israeli army, and they will be likely to offer their opinion as to which is a better gun. Ultimately, it would seem that though the M4 is a an excellent rifle and has served the IDF well for many years , the Micro Tavoris slowly taking center stage as the standard issue weapon of choice of the Israeli armed forces.

We are released lone soldiers who want to help you find info on drafting into the IDF!
Click here to contact us! 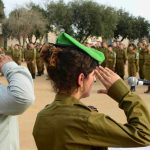